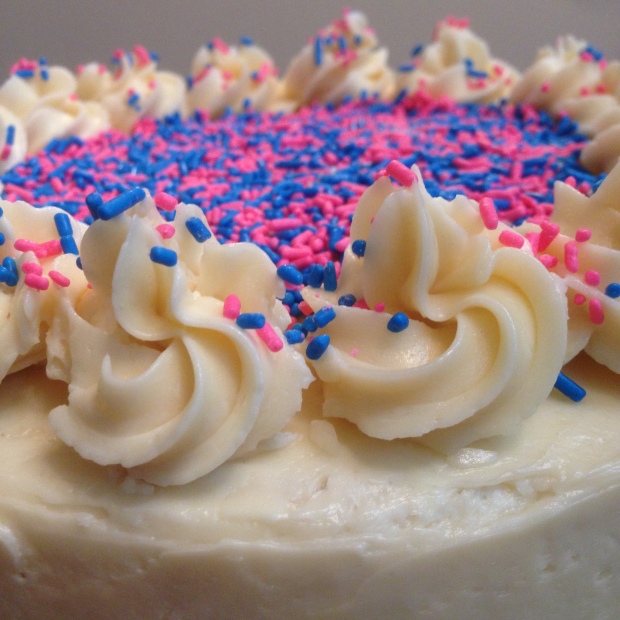 It’s a boy! My wife and I are excited to announce that that we are expecting a baby due in March 2017. We found out the gender right away because my wife could not wait any longer (apparently), even though I tried to convince her to keep it a surprise for a few days until my parents arrived. My wife is terrible at keeping secrets, and most of her family found out within hours of us knowing. So, the surprise was mostly for my parents/family. Almost everyone that my wife and I had spoken with about the baby thought it was a boy, so by the time we cut the cake the only surprise would have been if it was a girl.

I kind of wanted to make this cake anyway, and I thought that it would make a nice gender reveal cake given that the filling would be easy to color. The cake was crumby but moist. It is essentially a recipe for red velvet cake except it doesn’t have any cocoa powder or red food coloring.  As a result, it has a little bit of a tangy flavor. The cake crumb made it a little bit difficult to frost, so it would be worth wrapping and refrigerating the cakes after removing them from the pans to firm up a little more.

The blue filling is cheesecake, but instead of being cooked in the oven,  it’s cooked on the stove top then chilled in the freezer. I let mine chill in the freezer a little bit too long (and may have thickened it too much on the stove), which made it a little harder to spread over the crumby cake. It tasted like cheesecake, and it is definitely an easier process to add cheesecake to a cake than the old springform pan/water bath method. However, it wasn’t really soft enough for a cake filling.

The marshmallow buttercream was better. I think that this alternative recipe for Swiss meringue buttercream is great. It’s more of a velvety frosting that isn’t as cloyingly sweet as some American buttercreams can be. This particular recipe was a little bit more sweet than previous recipes I’ve tried as powdered sugar was added. The source recipe notes that up to 3 cups can be used to taste, but I thought that the 1 cup I used was plenty. I did alter the recipe slightly to cook the egg whites to temperature at which salmonella is killed. I’m sure it would have been fine to use the egg whites from the carton, which are already pasteurized, but I wanted it to be 100% safe for my wife to eat. Also, anything with marshmallows is inevitably a sticky mess, and this was no exception until the marshmallows were adequately mixed into the butter. FYI. 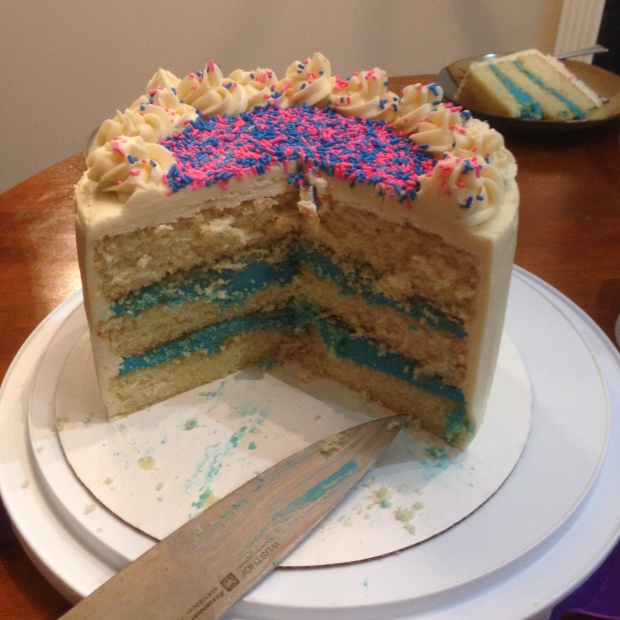 I thought this was a good cake, but I’m not sure that I would be in a hurry to bake it again. My dad thought it was pretty good, needing no convincing to join me for a slice each night. The first night of eating the cake my wife essentially ate only the cake, leaving the frosting and cheesecake completely intact. I don’t think that she’s as big a fan of the Swiss meringue buttercream. Similarly, my mom at just the cake and cheesecake, leaving the buttercream. Both of them commented that it was good, just “too rich,” which I would probably agree with. I thought the richness of the buttercream paired well with the cake flavor, though.