A version of this cake has been in my draft recipe list for some time now. My wife really likes these Banana “Bill” Pancakes, so I’ve been toying with recipes that fit this flavor profile. We also had some extra ripened bananas laying around towards the end of the week, which helped my baking plans for the long weekend. 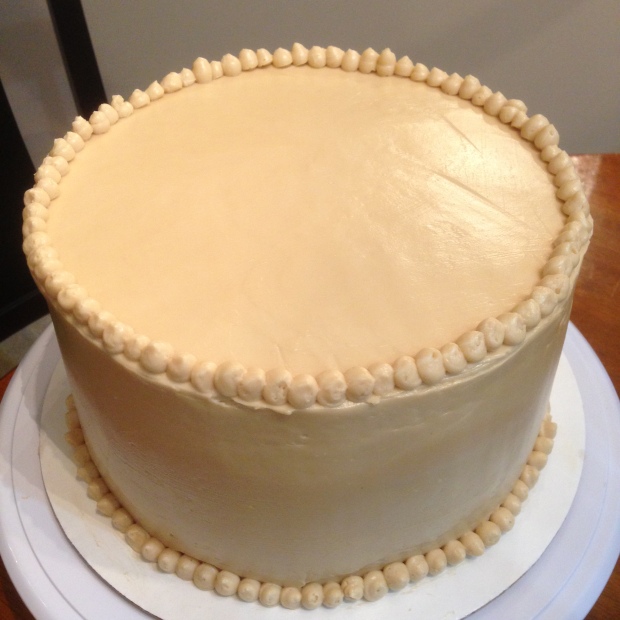 One of the most annoying parts of baking is the (American) convention to exclude ingredient weights from a recipe. I find it particularly annoying for recipes with fruit or vegetables because it’s likely that you will use a different amount of the ingredient than the recipe creator intended. To add insult to injury, there is a wide range of consensus opinions as to the weights of certain ingredients. Fortunately, mashed bananas can be measured fairly well in cups, but this is often not the case for carrots, berries, and apples. For the mashed bananas in this recipe, I also measured the weight in ounces for future reference given the variability of banana sizes. I found that a medium-sized banana weighed approximately 4.5 ounces.

These cakes were simple to prepare, baked evenly (with cake strips), and smelled great out of the oven. I made a note to myself during my preparation to toss the chocolate chips with a little bit of flour so that they would not sink to the bottom of the cakes when baking, but I decided to skip this step at the last minute thinking the batter was dense enough to maintain chip position. Well, I was wrong, and most of the chips sank to the bottom. I’m not sure the extra flour would help, but it’s certainly worth a try.

The cake was good. It wasn’t quite banana bread, but it also didn’t achieve the consistency of cake. The butter helped make it a little bit lighter than an oil would have, but I think there are a few other changes that could be made for the next version of this cake (like this recipe with an extra banana). The chocolate chips did add a nice flavor contrast, and, ironically, worked well at the bottom of each layer next to the buttercream. I would probably remove the chocolate chips next time and add a chocolate drizzle on top to attain the same flavor profile.

This is my second attempt at swiss meringue buttercream. I felt like the first time had mixed reviews and extenuating circumstances, so I wanted to give it another try. I went to Cake Paper Party for the recipe because I every recipe of Summer’s that I have used has been ridiculously good. This includes Red Velvet Cheesecake Cake II, Strawberry Sprinkle Cake, Raspberry Pinot Noir Cake, and Tiramisu Cake. The Raspberry Pinot Noir Cake and Tiramisu Cake are probably in my list of ‘Top 5’ cakes. Seriously good. I’m sad because it seems like she isn’t posting recipes any more, but, fortunately, she contributes great baking insight on The Cake Blog. 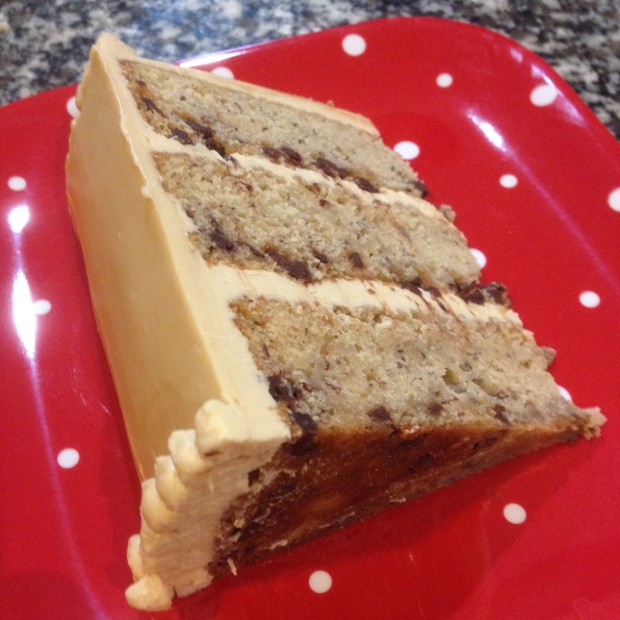 So, Summer has an absolutely genius method for “swiss buttercream”. It turns out the meringue step is not required to achieve the same velvety consistency. I have to admit that I was quite skeptical at many steps in the process (and I broke a quick read thermometer when I dropped it into the egg mixture), but the frosting came together very easily. It’s actually quite magical, really.

The texture is light and very smooth, and it spreads well when frosting the cake. It is sweet, but not cloyingly sweet, and has a more subtle taste of butterscotch/caramel. It is less powerful than this frosting, which is really too much for sweeter and denser cakes, like this banana chip cake. It might even be worth adding some extra cream to make the frosting even lighter in texture.

Overall, this was a solid cake that received good reviews from everyone. My father-in-law likes everything I make, and my brother-in-law enjoyed the larger slice I cut for him in addition to his wife’s idea of a “family slice”, which my nephew vigorously ate. My mother-in-law, who isn’t the biggest fan of sweet cakes, said “this is a really good cake.” My sister-in-law, who doesn’t like fruit, even enjoyed it. And, most importantly, unprovoked on our walk back home, my wife told me all of the things that she liked about the cake, particularly the silky smooth buttercream.