This pie is the result of my desire to bake new things. I like pie, and I like peaches, so peach pie. Plus, I had some time to kill yesterday, which is always dangerous for me.

The flavors in the pie are fantastic. I picked this specific recipe because of the maple bourbon caramel that gets drizzled over the peaches and the browned butter pecan streusel. Of course, the caramel did add a decent amount of liquid to the filling. Despite cooling for 3 hours at room temperature, 2 hours in the refrigerator, and another 2 hours at room temperature, the pie was still a mess when I cut into it. After two slices, I spooned out the excess liquid, then did the same in the morning after more liquid pooled. This helped get better slices the following night. I wonder if it would be worth straining some of the excess liquid before baking. Fortunately, the streusel is really good and is probably the highlight of the pie regardless of how messy it is.

Unfortunately, I don’t think my peaches were ripe enough because they were incredibly difficult to peel and remove the pits. I tried to use the blanching method to peel the peaches, but it didn’t work as well as many internet videos showcase. The pits were so hard to remove that I ended up just cutting them out with a knife. The peaches also held their form and did not cook down as much as I expected during the baking process. It’s still a good pie (especially with some vanilla ice cream), but the peaches will need to be much more ripe next time.

This is my second attempt at an all-butter pie crust after last year’s Thanksgiving debacle. This pie crust is a definite improvement on that crust, which was quite leathery, but I still think that a pie crust with both butter and shortening is the way to go. It tastes better and has a better consistency. The other issue here is that I think the crust needed to be parbaked since the filling contained so much liquid. The middle of the crust kind of disappeared into the peaches. I should also note here that I used 2/3 of the source pie crust recipe for 1.5x a normal pie crust to make it easier to roll out and have a thicker crust (hence the odd ingredient measurements). 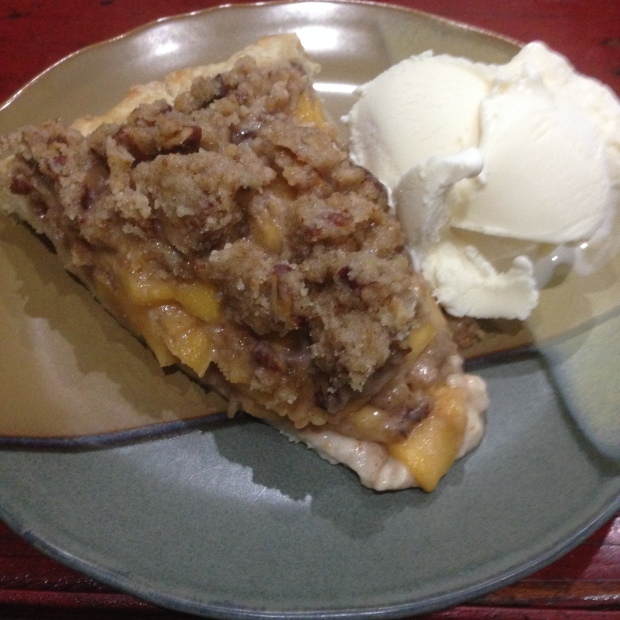 This recipe is definitely a keeper with proper cooling, riper peaches, and my usual (and parbaked) pie crust.