I’ve had this cake recipe on my mind for a long time, intrigued by the glaze that gets poured over the cake as it cools, similar to a poke cake. In the back of my mind, I always planned to bake it for an easy after-BBQ summer dessert to be served with whipped cream and berries. It’s such a simple recipe, essentially a dump cake with all the ingredients added to a stand mixer at once and mixed for 3-4 minutes. Once it cools, pour the buttery sugar syrup over top and wait until it cools completely. That’s pretty much it.

Everyone loved it, and many took extra slices for the next day. This enthusiasm got me thinking about ways to improve upon or alter the recipe. I clicked through to the source (Allrecipes) and noted that the glaze used an extra tablespoon of water. Some commenters swapped the water for bourbon, others swapped part of the white sugar for brown sugar, and a few added cinnamon to the cake. One suggested increasing the glaze recipe by 1.5x, which I think is a great suggestion. Another suggested more formal cake directions, creaming the butter and sugar, followed by the eggs and vanilla, then alternate additions of the dry ingredients and buttermilk. Some people baked it in two loaf pans, which I think would help with unmolding and result in nice even slices. 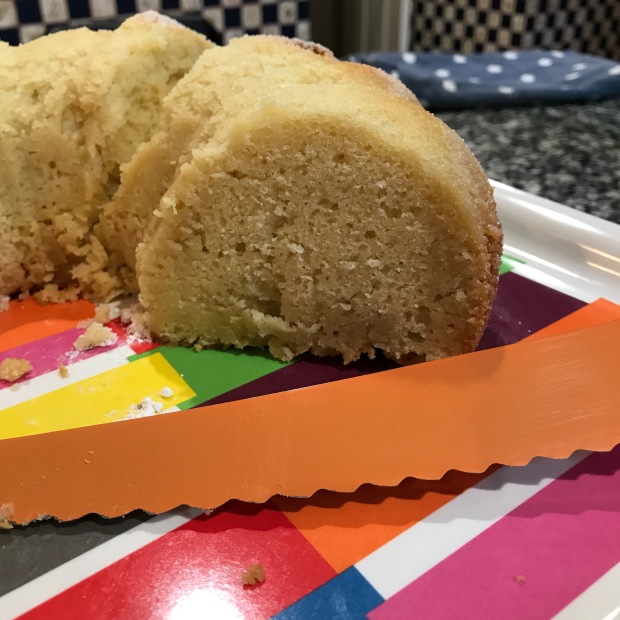 I had a small amount of trouble unmolding this cake, but it ended up coming loose after running a knife around the edges. One commenter suggested inverting the cake after it has finished baking and cooled for 10 minutes, turning it back into the pan, and then adding the glaze. I think that might be a smart idea, especially if the glaze contributes to the cake sticking to the pan.

The cake also baked up in the middle such that it propped the outer edges of the cake up when turned out onto the serving tray. Consequently, the cake eventually broke into thirds (you can see one fault line in the picture above). I probably could have avoided this by trimming the bottom.

I also tried to decorate the cake by sifting powdered sugar over the top, however, the cake is so moist that it absorbed it during transport! So, if you want that decoration, wait until just before serving.

KENTUCKY BUTTER CAKE
Based on this recipe.