I baked this cake for a friend’s birthday. His girlfriend made the request/order (my third professional cake), and since he’s a relatively good friend who had always joked about me baking him a cake, I happily obliged. She asked for a smaller cake, but, because it was a birthday cake, I made the executive decision to upsize the order. Everyone should have a “big, big cake” for their birthday.

This chocolate cake is one of my two go-to chocolate cakes (this is the other). I baked it previously on a whim in smaller form as this cake. It’s easy to prepare, has great chocolate flavor, and is incredibly moist.

I don’t get to bake many, if any, peanut butter desserts for my own consumption because my wife is “allergic” to peanut butter. She won’t get tested (the allergy developed when we were in college), but she claims that she will “eventually.” Fortunately, my kid doesn’t appear to be allergic, so I’ll have a peanut butter partner in crime despite her…

There was some leftover frosting that just couldn’t be wasted (you, know), and it was very good. I think the cream cheese makes it even more decadent than just a normal butter/shortening frosting. 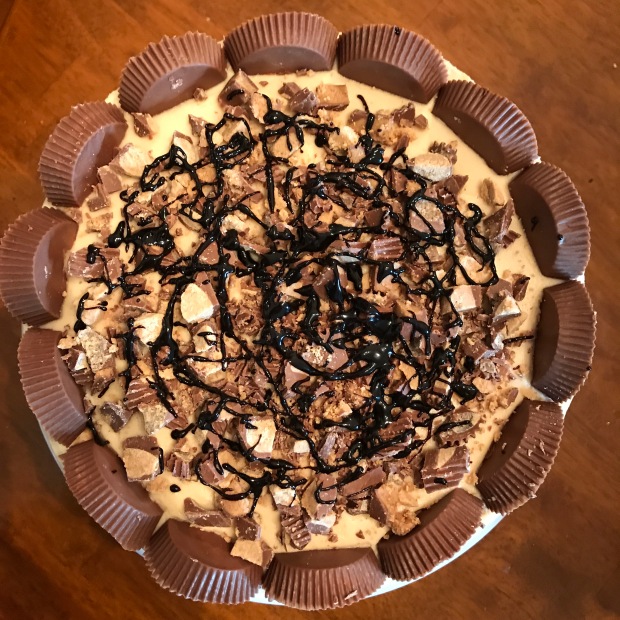 I’m sure this was an amazing cake, and everyone who had a slice relayed to me how delicious it was.

Update: I made this cake again a year later for the same friend, except for a few minor changes. I decided to use 9″ instead of 8″ pans, which resulted in layers that were about 1″ tall (they were about 1 1/4″ in 8″ pans). I also chose to use the chocolate-peanut butter glaze included in the reference recipe to try dripping it over the side like so many bakers do these days. I had moderate success, although I think this particular glaze was thicker than optimal but still successful.

PEANUT BUTTER CHOCOLATE CAKE
Based on this recipe.