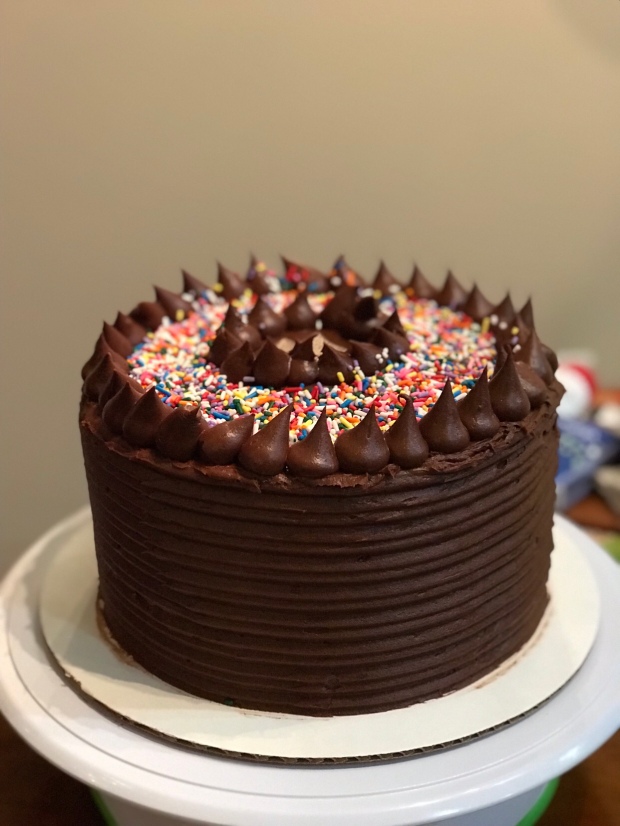 My wife’s favorite cake combination is funfetti cake with chocolate fudge frosting. Or at least that’s what she says. It hearkens back to her childhood, using box cake mixes and canned frosting. We even used to make these cakes in the days before I started baking seriously. I would challenge you to find one American dessert lover that doesn’t have a soft spot for that kind of cake.

Anyway, I had yet to actually make this cake combination for her on her birthday…until this year. In years’ past, I made an Wellesely Fudge Cake, a cloyingly-sweet Chocolate-Chip Cake with Salted Caramel Frosting (at her request), and an American Mud Cake. Chocolate is a major theme here.

I think funfetti is a lot like s’mores. The idea is better than the reality. People like the idea because of the memories it brings back, but, ultimately, there are better desserts and flavor combinations. This is the fourth funfetti cake on this site. While I didn’t eat any of the third cake (it was sold), I still think the original was the best. Don’t get me wrong, this is still a great cake, but I think funfetti-wise, the first was much better.

The fudge frosting on this cake was a direct request from my wife. She liked my cousin’s third birthday cake so much that she turned to me and said this is what she wanted for her birthday cake! Of course, it was nothing more complicated than the Hershey’s recipe on the back of the box of cocoa powder… which is very good indeed!

SAM’S BIRTHDAY CAKE
Based on recipes found here and here.