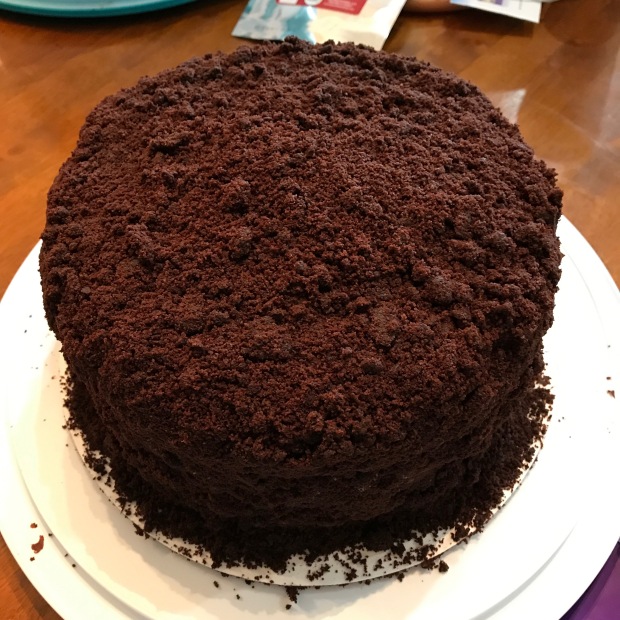 I stumbled across this recipe for the Ultimate Chocolate Cake via Eater.com a long time ago in a post highlighting the use of GMS as the secret ingredient to the perfect chocolate cake. I ignored the recipe at the time because I didn’t think it was worth buying GMS only for this cake (and ultimately such a small quantity). But, the internet led me back to this cake recipe eventually, I caved, and I bought the GMS to make this cake in advance of Mother’s Day because chocolate.

#cakeproblems. I couldn’t bring that cake to a Mother’s Day BBQ, so I scrambled quickly and made the American Mud Cake that I knew would be a hit. As terrible as it looks, however, the cake (and frosting) is actually quite good. So good, in fact, that we ended up eating this cake off the scrap heap over the next few days even though it essentially became a trifle after it toppled over.

So, what happened? Well, these cakes are so incredibly light and moist that they started crumbling as soon as I flipped them from the pans. Since they baked a little unevenly, I attempted to smooth the layers, but that just created more of a crumbly disaster. I knew immediately that I would be baking another cake, so I continued anyway because, as my sister would tell me, “it’s still edible!”

To add insult to injury, the frosting is effectively fudge. The video from the original recipe shows the frosting being piped onto the cake in a spiral, but I thought that was just for aesthetics. Nope. It’s because the cake is so delicate that trying to spread this thick frosting with an offset spatula rips it apart. I tried to pipe the frosting on the second and third layers with moderate success (which I then tried smoothed with less success. why?).

Reading through the comments under the recipe, I realized that I was not the only one to experience the light, fragile cakes crumbling and the difficulty of spreading the thick, fudge frosting. Since the cake was so delicious, I’m going to try making it again. To firm the cakes, I think I will freeze them in the pans. I also might consider lining the pans with aluminum foil before the parchment paper and grease to lift the cakes out rather than flipping them (in the absence of three springform pans or separate bake times because I have only one springform pan). I also didn’t use cake strips, which may help even the layers. The frosting must be piped, however, the frozen cakes might provide some flexibility in this regard.

ULTIMATE CHOCOLATE CAKE
Based on this recipe.

Chocolate shavings and/or sprinkles, as desired